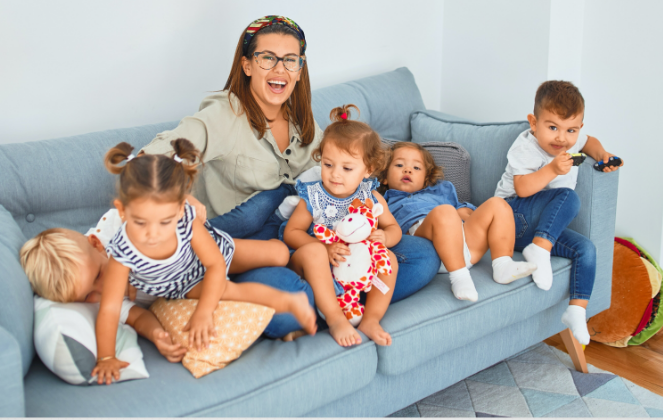 To get the little ones excited for Christmas we’ve put together our favourite 10 of the best Christmas movies to watch with the kids at Christmas (or anytime of the year).

Whether you’re after a fantastical Christmas adventure, a bit of Christmas glad tidings or some silly slapstick fun we have got you covered with out bumper list packed with Christmas movie ideas. Think Santa’s Present Sack but for films.

Once the hard bit of deciding what you’re going to watch is over you then have to find where you can watch it. Between Netflix, Amazon Prime, NowTV, Disney + and Apple TV you can have too much choice. So, that’s why we’ve done the leg work for you and put together a list of the best Christmas films to watch with the kids, what’s the parental rating of each and most importantly where to find them! All in one, easy to read list. It’s that simple.

10  of the best Christmas movies for kids you should watch:

Where can I find it: Disney +

Michael Caine (from for the Italian Job) plays egocentric Ebenezer in this heart-warming classic tale. Muppets and songs and plenty of laughs are packed into this epic adventure.  Will Ebenezer change his wicked ways to give Kermit (Bob Cratchit), Miss Piggy and their family the Christmas Day they deserve? A story of changing and learning the true meaning of Christmas.

Where can I find it: NowTV, Disney+

This three-part video will remain a firm Christmas classic for years to come. Part one features Donald Duck in a similar story to Groundhog Day. Secondly, Goofy is featured in a story where his son is doubting the existence of Father Christmas. But don’t worry, Goofy manages to convince him of the truth. (but if your little one is of a doubting age maybe skip this bit unless you want a bit of a conversation of your hands). Lastly, Mickey and Minnie learn the true meaning of Christmas in the last poignant tale of the three.

Where can I find it:Now TV

A busy Dad, Howard Langston is desperate to redeem himself after missing his sons important karate competition. His son, Jamie only wants an action figure called Turbo Man for his Christmas. Regrettably for Howard, it’s now Christmas Eve, he’s forgotten to get a Turbo Man for Jamie and there are none anywhere. A playful and light-hearted search for a toy for his son gets Howard in some trouble but all comes right in the end.

Where can I find it: NowTV, Netflix

Everyone loves a bit of Dr. Seuss’. When the town of Whoville announce their Christmas, celebrations are going to be three times greater the grumpy, Grinch tries to steal Christmas (as voiced by Benedict Cumberbatch). But the Grinch never realised the real reason he hated Christmas so much, because he was lonely. It takes little Cindy Lou to show his true colours. A classic Christmas film reanimated.

Kurt Russel plays Santa Clause in this new classic Christmas film. Two children sneak into Santa’s sleigh but it malfunctions and crashes. Although everyone is fine, the presents are scattered, Santa’s completely off schedule and it’s up to the children to help get the presents to the correct family for Christmas morning.

Where can I find it: to rent or buy only right now (accurate as of publishing)

Will Ferrell is everyone’s favourite Christmas elf in this hilarious family film. A sure hit with the whole family. Buddy the elf (Ferrell) realises he isn’t an elf at all, he’s human! So he travels to New York City to find his real Dad. His real Dad, Walter is not convinced Buddy is his son, or even an elf at all. Buddy experiences human culture, connection and Walter learns to appreciate the little things that only a bit of Christmas joy can bring.

Where can I find it: NowTV

A wonderfully animated film telling the tale of a young child who sees a mysterious train in the middle of the night heading for the North Pole. He’s invited on a trip of a lifetime with a group of others to meet Santa Claus but it’s a perilous journey with many twists and turns. An exciting Christmas film for the kids.

A fun packed 3D computer animated set on Christmas night featuring Arthur, Father Christmases son. Arthur realises that Santa’s high tech sleigh has failed to deliver a girls present and save her Christmas. Accompanies by a young Christmas elf and a few other companions.

If you want to make a delivery of your own, we have our very own santa sacks:

Jesper, a trainee postman has been trying to flunk out of his academy. But, his father sends him away and gives him a goal to hit. Otherwise, he will be cut off from the family fortune. The story follows. Will Jesper’s family sabotage his efforts or will he and Klaus succeed to deliver all of the gifts in time?

So, technically this is four mini films but we’ve counted it as the one: these four “featuring Shrek and Donkey, Hiccup and Toothless, and the wacky animals from Madagascar.” Really fun and goofy, these will be a particular hit with the younger member of the family I’ll bet. A great film to finish our top 10 list of kids Christmas movies.